The future of racing is here. 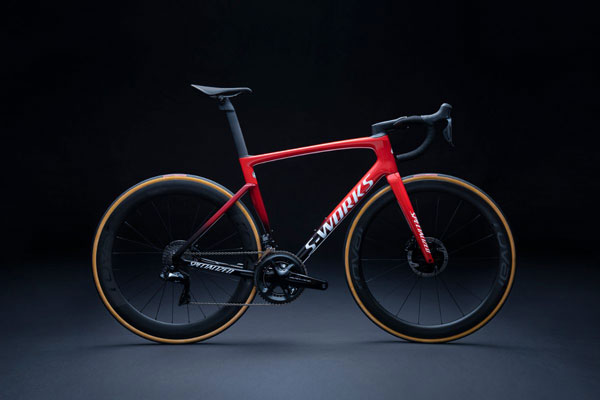 The future of racing is here. With the all-new Tarmac SL7, we've drawn on decades of research and innovation to create one bike that puts an end to compromise. Starting now, riders and racers will no longer be forced to choose between the aerodynamic advantage of the Venge or the handling and lightweight climbing prowess of the Tarmac. In the past, having one bike that embodied all these things was considered a dream ask from our riders. That dream is now a reality. The data shows that races are getting longer, faster and contain more vertical ascent than ever before. Now, with the Tarmac SL7, the only choice your riders need to make is when to attack.


Aero, stiff, light. Pick three. Up until now, this triangle of features was limited to only two choices. An aero bike wasn't light enough to climb effectively and a lightweight bike typically sacrifice aerodynamics. With the Tarmac SL7, compromise is a thing of the past.

Anything lighter is illegal. At 6.7kg with an 800g frame out of the box, this machine is ready to race at the UCI legal limit. Just add your favourite pedals and take to the start line.

Looking for breakaway glory or a sprint victory? No problem. 45 seconds faster than the Tarmac SL6 over 40km, this bike is the fastest bike on every road.

Our Rider-First Engineered™ philosophy ensures that each and every size iteration of the bike delivers the same legendary Tarmac handling–telepathic response at the bars, magic at the pedals, and the comfort to stay fresh over hundreds of kilometres.

The Tarmac SL6 continues to outperform nearly every bike on the market, the only bike faster is the SL7. The SL6 will remain in the lineup in Base, Comp and Sport models. See the Future of Racing


How much does the Tarmac SL7 weigh?
The S-Works Tarmac SL7 uses our most premium FACT 12r material and layup to achieve a painted weight of 800g in the lightest colourways. The complete out of the box weight of the S-Works Di2 model is 6.7kg in the Carbon/Color Run Silver Green colourway.

What's the largest tire size you can install on the Tarmac SL7?
Every Tarmac SL7 comes spec'd with 700x26mm tires, however, the frame was designed with much larger clearance in mind. You can fit tires up to 32c on 21mm rims with 4mm of clearance all around.